In 1985, UNESCO listed Sultanahmet as the oldest settlement in Istanbul on the World Heritage List. According to the latest data, the town was founded 7 centuries BC, however, during the digging of the tunnel for a new trolley line below the old part, the remains of a settlement about 6500 BC were found and the newer remains of the Phoenicians’ buildings, and eventually the cemetery of sunken ships, so have given up digging that tunnel route because of the archaeological sites listed.

To reach Ija Sofia our next destination, which is also located on Sultanahmet Square, we had to walk some hundred meters. These hundreds of meters were several millennia old. We met them to tell us their story.

Sultanahmet Square was formerly a hippodrome. Today it is a paved square, without stands, with a wonderful park with benches of fountains, but there are still some monuments from that time. Constantinople was modeled after Rome, Constantine declared it the capital of the Empire Car Which is why it depicted the continuity of Roman spatial organization – a forum, a hippodrome, an imperial palace, cardo and decumanus¨. There were sports competitions, horse-drawn carriage races, various ceremonies, gladiator fights filling the theater at the hippodrome. However, this was not the only role of the hippodrome. Namely, this grand arena was adorned with works of art brought from throughout the empire, and also served as an indication of the splendor and power of this glorious empire. The racetrack was 450 x 130 meters in size and could accommodate about 100,000 visitors at a time. The Imperial Lodge (Kathisma) was located on its eastern side and the Imperial family had direct access to it by secret tunnels from the Imperial Palace. In its northern stands was a group of bronze sculptures known as “The horses of St. Mark ”, which was looted and taken to Venice by the locals, and can be seen today on the front of the Basilica of St. Mark. Brand, there is one horse foot left in the square, which is located in one of the museums in Istanbul today. Around the U-shaped race track, there were 40 rows of seats.

The clashes of cheerleading groups at the racetrack were thousands of times more massive than those at Heyselu Stadium. Four carriage teams participated in weavers; each of them was financially supported by a different political party of the Roman or Byzantine Senate, and during the races, large sums of money were invested in bets. Because the racetrack was the center of social life in Constantinople, political parties were often classified into one of four fan groups: Blue (Venetoi), Green (Prasinoi), Red (Rousioi) and White (Leukoi). The biggest clash of fan groups has sparked major protests known as the “Nick Rebellion” in 532, killing about 30,000 people. During that rebellion, the then church of Hagia Sophia was completely destroyed. In addition to trailer races, gladiator fights with wildlife, music concerts, dance performances, and acrobat performances could also be seen.

After the Fourth Crusade, the hippodrome was devastated and never recovered. After Constantinople conquered the Ottomans, they used it for all-day ceremonies such as the procession of celebrating the birth of the sons of Sultan Ahmed III. After the lavish hippodrome was looted and destroyed, only the Egyptian obelisk, the Serpentine Pillar and Constantine’s Pillar and Million remained of him. 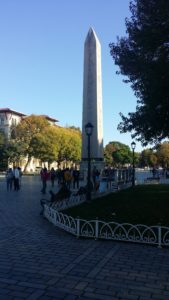 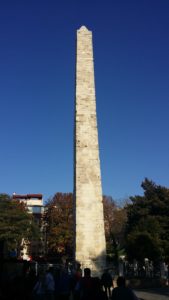 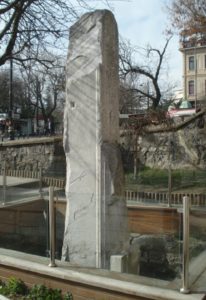 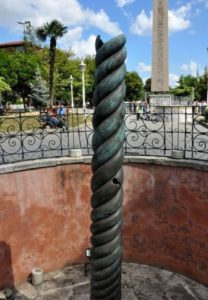 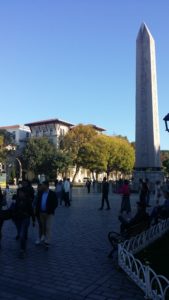 Following the Sultanahmet Square towards Hagia Sophia, a hieroglyphic obelisk appears in front of us. I thought it was a replica, since we were not in Egypt. We were not in Egypt, but the obelisk did come from Egypt. It used to stand in front of the temple of Amun in Karnak (a temple dedicated to Amun whom the ancient Egyptians regarded as a deity). The obelisk was taken from Karnak to Rome, from where it was moved to Constantinople. It was 3,500 years old and was built during Pharaoh Tutmes III. The Romans brought obelisks as huge trophies to mark their victory over the Egyptians. If I knew how to decipher hieroglyphics, I would have been able to find out all about the achievements of the faron for whom the obelisk was carved, at that time it was the trophy of Emperor Theodosius.

It took only a hand and time to carve an obelisk almost 30 meters high from a granite rock in one piece. Of particular strangeness is how, after the occupation of Egypt, the obelisks were transferred by the Romans to their parts of the empire? This one at the racetrack was 29m high and weighed 380 tonnes. In addition to the obelisk on the hippodrome, there is a Pillar of Constantine, just not known when it was made. It was once covered with bronze but after the Fourth Crusade it was stripped to make money out of bronze. 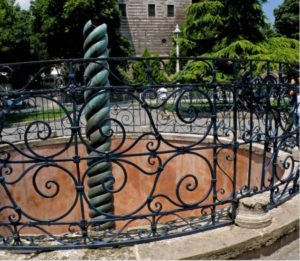 Not only the obelisks were exhausted from the authentic space, but also the Serpent Pillar, which was brought from Delphi where it was erected in the 5th century BC in honor of the victory over the Persians. The aforementioned monuments of ancient civilizations stood on the square as a time machine, though the serpentine pole was much destroyed as it was believed that the serpents brought misfortune. Obelisks are also associated with some ‘magic’ effect, It is safe to know that obelisks also played a big role in the time calculation of the time, which was determined by the length of the shadow, the longest shadow because its height was the obelisk. 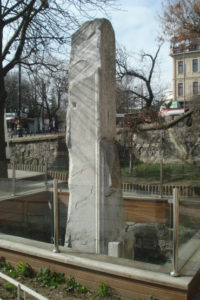 The 16th century is slowly disappearing, and today only one fragment of the former building can be seen, in the form of a pillar. The platform of the boards surrounding the pillar shows the distance to all European and several world cities. A million pillars are more recently eight centuries older than the serpentine pillar, behind the ruin of the wall and are almost invisible, a smaller stone pillar from which the distances in ancient Rome were measured. The million built by Emperor Constantine, covered with a vault, was a building that marked the zero point from which, like the Milliarium at the Forum in Rome, measured the distance to all cities and lengths of all roads in the empire.

In addition to the archaeological value, the mentioned monuments also had practical use, the obelisk was used to measure time, and a million to measure length.

As we approached Ayya Sofia we saw a beautiful fountain with a green dome. The fountain is a gift from Kaiser William II, the Turkish Sultan Abdul Hamid, during his visit to Istanbul in 1898.

We reach the center of the square occupied by a fountain whose edges are decorated with mosaic, and the colors of water and jet cannon change from green to blue, which ideally blends with the colors of the domes of Hagia Sophia and the Blue Mosque. On the side of the square is the Women’s Public Bathroom of Sultanate Hurem, as well as many beautiful villas with beautiful gardens. In many places there are public fountains on which the name of the builder is written. In the Muslim world, they represent the public good as well as the cuisines and the permanent sadak (alms giving).

Sultanahmet Park is a beautiful destination with many old cultural and historical monuments, but it is also the embodiment of the Turkish way of life. It is surrounded by comfortable restaurants and cafes where batteries can be recharged for a further tour of the city. And not to plan the shops and attractions, walking through the park and taking a break on the bench are enough to fully enjoy its magnificent surroundings. 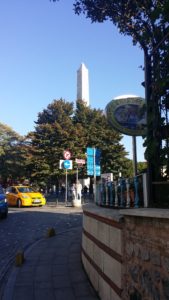 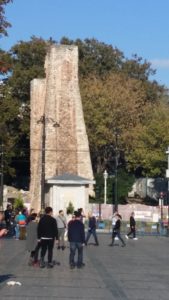 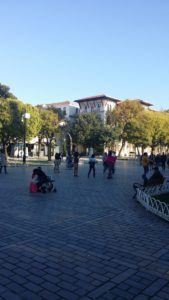 So we took a walk and busy looking at buildings from many periods, we were already close to Ayya Sofia where we finally sat down to wait for our guide Ozzy.