WHERE DID ALL the sneakers go? Just one year ago, male models in all kinds of kookily colored sneakers stomped down the runways. During the latest edition of the men’s fashion shows, which wrapped up last Sunday, athletic shoes were eerily absent. I didn’t spot a single model striding down the catwalk in cushy kicks at shows from brands including Zegna, Givenchy, Dior Men and Hermès. Instead, they wore hardy-soled boots and traditional dress shoes.

Conservative cobbling, however, was just one element of a shift toward formality that informed a vast number of this month’s hundred-plus shows. Also on view: tailoring aplenty, vests and topcoats. What’s new about this spin on traditionalism is that it’s imbued with an of-the-moment ease. A bevy of well-appointed double-breasted suits were on offer—at Berluti, Gucci and Officine Générale—but models often wore them unbuttoned, reflecting a loose, liberal approach to tailoring. Last year, sporty puffers prevailed. This time round, Valentino, JW Anderson and Jil Sander all presented Savile Row-style overcoats, albeit in slope-shouldered cuts roomy enough to allow for layering underneath.

I saw weirder styles, too—Rick Owens saw fit to dress a man in a one-legged, ribbed bodysuit, for example. But the more effective experiments were riffs on proven styles of the past. The spliced, diced and resized trench coats and military bombers that Chitose Abe presented at Sacai combined familiarity with inventiveness. Though British designer Craig Green pushed his kaleidoscopic quilted coats to extravagant extremes, they were still rooted in work wear. Even polarizing leather trousers, which brands from Salvatore Ferragamo to Dunhill to Fendi proposed with straight faces, felt functional in decidedly straightforward cuts.

The dominant push toward proper clothes was clearest at Louis Vuitton, which has become a catalyst for trends under its hype-maker/men’s artistic director Virgil Abloh, who recently prophesied streetwear’s decline. While models in actual suits sauntered past, the celebrities in the front row, clad in last year’s garish streetwear, suddenly looked entirely out of fashion. 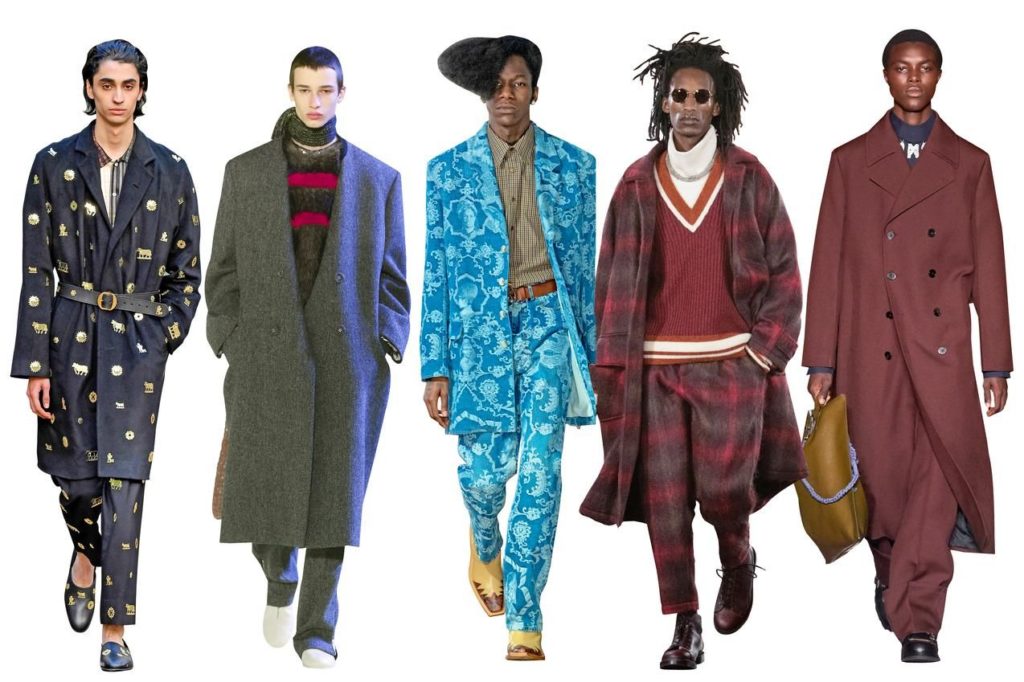 A multitude of designers dressed models in topcoats and trousers in coordinating fabrics for a head-to-toe look. (The idea? At some point in the day, you shed the outerwear and break the set.) Like mega-suits, these elongated outfits modernized traditional tailoring. From left, ornamental and elegant at Bode; a tried-and-true textural gray from Raf Simons ; British designer Martine Rose’s Victorian wallpaper print; Nicholas Daley’s fabulously fuzzy tartan take; Jil Sander’s sweepingly compatible combo.
STAMPING GROUND 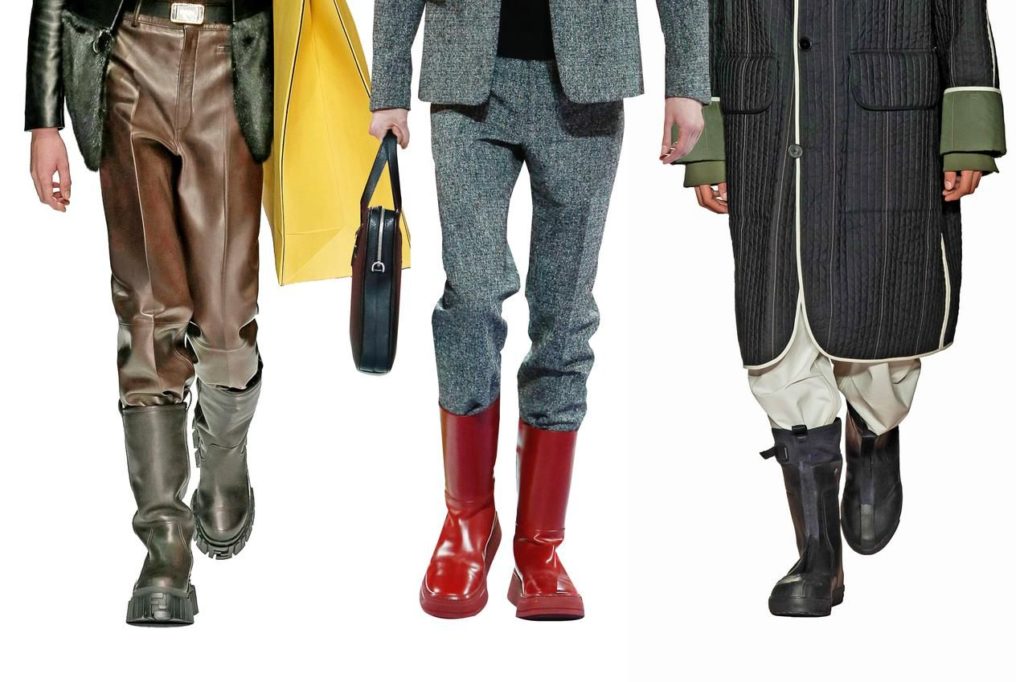 Shin-high waders suggested that the models would be rushing off to fish after the show. Note how all pant legs are tucked in for optimal puddle jumping. From top: a fine pair at Fendi; cherry-red “gum” boots drew the audience’s eyes downward at Prada; OAMC’s clompers have an easy-on-easy-off zipper on the back.
HIDE TIMES 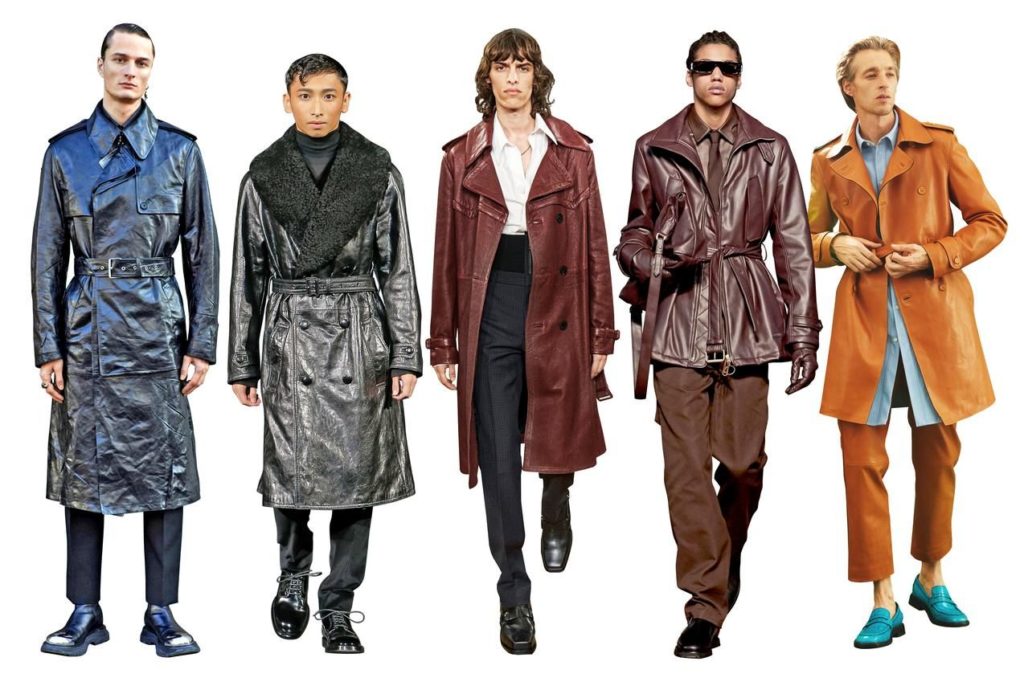 Paging Shaft: The oh-so-’70s leather trench coat has roared back into style. From left: a brooding motorcycle style by Alexander McQueen; a shaggy collar softens the look at Dolce & Gabbana; Givenchy’s cigar-brown number has a vintage vibe; slick and belted at Off-White; the tender tobacco option by Sies Marjan was shown with matching leather trousers for a trend twofer. 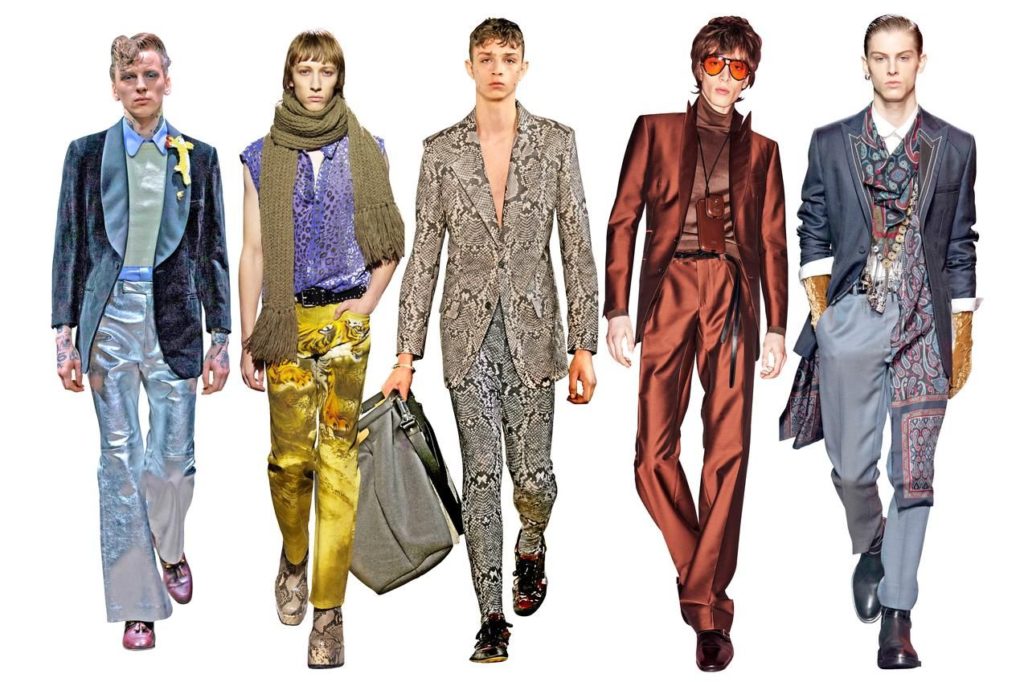 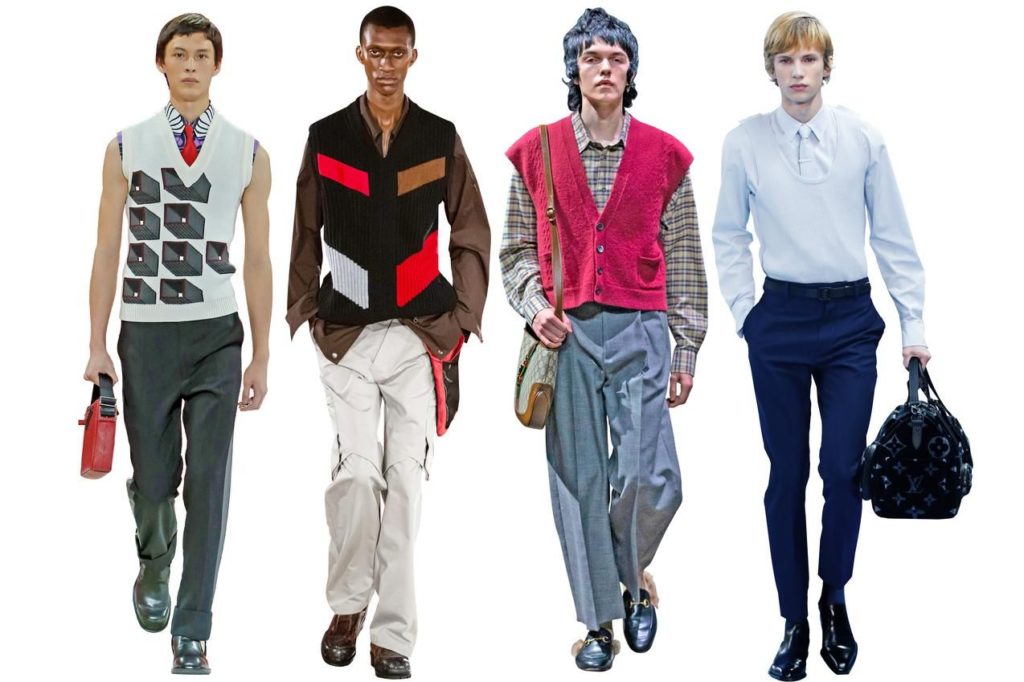 The once chaste sweater vest has undergone an artful makeover. From top: a graphic geometric display by Prada; vivid diagonal splashes on a knit by Kiko Kostadinov; a grungy crimson button-up at Gucci; Louis Vuitton’s sweater vest featured a broad, curved neck showing off a tonal tie underneath.
swj.com / balkantimes-press