Global smartphone shipment growth in the final quarter of 2019 marks a new cyclical era for the mobile market, according to research firm Canalys

Canalys research shows that global smartphone shipments grew by 1 per cent in Q4 of 2019, repeating the previous quarter’s growth.

Apple shipped the greatest number of smartphones over the quarter with a 9 per cent increase in annual growth up to 78 million units. Analysis from Canalys claimed this was due to increased demand for iPhone 11 models.

In second place was Samsung, with annual growth of 1 per cent up to 71 million units and then Huawei with a decline of 7 percent down to 56 million units. 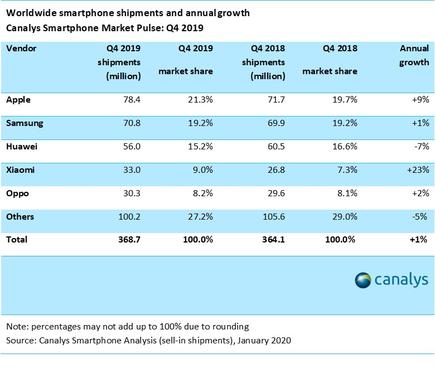 Ben Stanton, senior analyst at Canalys, labelled the Q4 results as an “industry-wide success” with eight of the top ten vendors recording growth.

“When we saw the first declines in global volume a couple of years ago, Canalys stated that the industry was moving from the growth era to the cyclical era,” Stanton said.

“This is it. This growth spurt will not last forever but will be one of a series of peaks and troughs, as the customer refresh rate for smartphones reaches its new equilibrium point.”

“Smartphones under US$100 have been a major focus, as vendors targeted the installed base of users still using feature phones,” said Jin.

“Vivo, for example, had exceptional success with the cheap Y91C in Indonesia this quarter. Apple also saw success in emerging regions as the cheaper iPhone 11 tempted a broader base of customers than it is used to.”

Despite growth recorded in Q3 and Q4, 2019 overall saw smartphone shipments fall by 2 per cent, when compared to 2018 data, down to 1.37 billion units. Canalys analyst Mo Jia said this was due to the actions of  Huawei and Samsung. 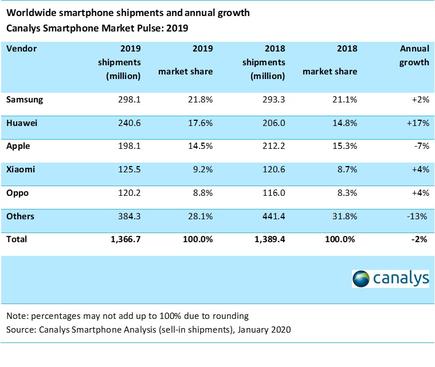 In 2018, Huwai took “huge chunks” out of Samsung’s market share and 2019 was supposed to see Huawei taking Samsung on even further, Jia said.

“Samsung knew this and was ready for all-out war. It drastically increased its portfolio, and slashed operating margin. But the battle never came, as Huawei’s placement on the US Entity List in May stifled it overseas,” he claimed.

Samsung’s preparation efforts may have worked in their favour regardless as the vendor had the highest market share at 21.8 per cent and shipment growth of 2 per cent to 298.1 million.

Huawei came in second place 17.6 per cent market share and then Apple with 14.5 per cent.

Because of Huawei moving away from Google Mobile Services, it had to change tact, Jia said.

“It must maintain as much channel support as it can in key markets like Western Europe. It must curate a developer ecosystem to support Huawei Mobile Services. And most importantly, it must maintain scale. If it loses scale, it loses developer interest,” he said.

For 2020, Canalys analysis points to the smartphone being more important than ever.

“Declines do not mean people are using smartphones less. In fact, the population is more addicted to phones than ever,” the research firm’s analysis read.