After the incident that took place in the morning in front of the House of the National Assembly, protests of the ultra-right group led by Srdjan Nogo, a former member of the Dveri movement, were organized in the center of Belgrade in the afternoon.

The citizens gathered on the Republic Square, and the protest walk through the central city streets continued with a rally in front of the House of the National Assembly. 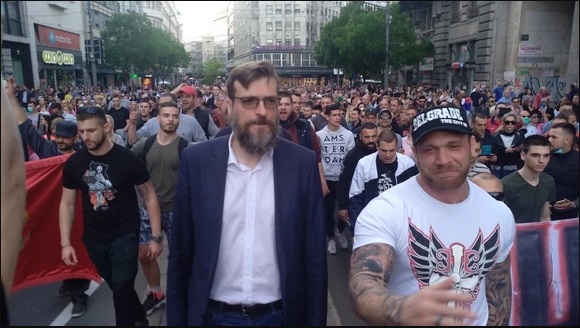 They protested not only against the current but also the previous government, against the upcoming elections, a large number of migrants in Serbia.

“We don’t want elections, we don’t want migrants,” were just some of the messages that could be heard.

– We will not do many things, but we want the government and the state to return to our hands, to return our lives back to us – Nogo said.

The introduction of a 5G network in our country was also targeted.

– I am not a doctor, so I cannot say that I am against the 5G network … However, if it is so good and not dangerous, let Aleksandar Vučić introduce it in his house first – said Nogo.

Nogo said that the request of the protest is to postpone the elections, to form a technical, transitional government, as well as to provide equal conditions for all participants.

For almost an hour, King Milan Street was closed to traffic and public city transport was suspended, so that around 7.30 pm, those gathered started to slowly disperse.