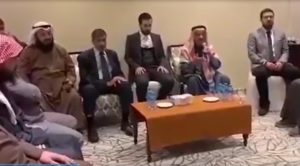 Palestinian minister Mahmoud Abdul died today while giving a speech in Kuwait at a young man’s wedding. If we pay attention to his last words, we will hear Shehadet – the testimony of the oneness of the Savior.

This recommendation comes from a hadith which refers to: On the word of the Messenger Muhammad , s.a.w.s, which if a man speaks sincerely from his heart and then dies, he will be banned from the fire of Hell; It is a word of sincerity, which the Messenger Muhammad , s.a.w.s, demanded from his uncle Abu Talib when he was on his deathbed (Shehadet – testimony that he had no right to be worshiped except Allah – La ilahe illallah).