A scientist accidentally found in the hidden shelves of a library in Corsica the first edition of Isaac Newton’s capital work in 1687, in which a physicist described how he came up with the idea of gravity while in isolation from the great plague epidemic of 1665.

For most learned people, the English physicist, mathematician, astronomer, alchemist and philosopher of nature, Isaac Newton (1643-1726) is one of the most significant figures in the history of science. His study, Mathematical Principles of Natural Philosophy, published in 1687, which describes universal gravitation and the three laws of motion, laid the foundations of classical mechanics and served as an example for the emergence and development of other modern physical theories. 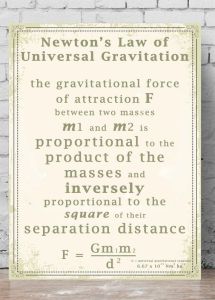 However, even anyone who has not heard of Newton has heard of the story of an apple falling to the ground as the most common proof of gravity. Both Newton’s assistant John Conduit and Newton’s biographer William Glassley wrote about the event, and Isaac himself later “decorated” this anecdote.

The story goes as follows: In 1666, 22-year-old student Isaac Newton was staying with his mother, at his hometown in Lincolnshire. As he walked thoughtfully around the garden, he noticed that apples always fell straight to the ground. Why don’t they fall down or go up, he wondered. Because the Earth attracts them. Being obsessed with celestial bodies, and moving the moon around the Earth, he thought that gravity could reach distances so great that Earth’s power (which drew an apple from a tree to the ground) extended much beyond what we originally thought.

Few know that Newton made this discovery while in isolation – in modern language, socially distanced – during the great plague epidemic that prevailed in London in 1665-6. years. In 18 months, 100,000 people or a quarter of the population have died in the capital of England.

Two decades later, in 1687, Newton published the first three-volume edition of The Principle, and two subsequent editions in 1713 and 1726, with personal corrections. All editions were in Latin. It was first published in English in 1726.
Latin versions are very rare and expensive. That’s why Vanina Shirinski-Shihmatov, director of conservation at the Ajaxjo Public Library in Corsica, was shocked when she accidentally found a copy of 1687 a few days ago while researching a list of books by the library’s founder, Lucien Bonaparte, one of Napoleon’s brothers. .
“I found the Holy Grail in the main room, hidden among the top shelves,” Vanina Shirinski-Shihmatof told the Frans-Press Agency (AFP).
“The crust is slightly damaged, but the interior is in excellent condition,” she added.
A few years ago, the Latin edition was auctioned off at Christie’s for $ 3.7 million.

Although by all criteria a genius, Newton himself was quite modest about his achievements. In a letter to philosopher Robert Hook in February 1676, he wrote “If I have seen further than others, it is because I stood on the backs of giants,” referring to those whose works and discoveries he relied on.

He also wrote in his memoirs: “I do not know what I look like to others, but I saw myself as a boy playing on the shore looking for a pebble that is smoother than the others or a shell more beautiful than ordinary, while the vast ocean of truth, undiscovered, lies in front of me ”.