Travel planning has changed — and not in a good way. In addition to booking a flight and hotel, travelers are faced with questions that were unthinkable just six months ago.

Where can I go? Do I need a negative Covid-19 test result to enter? Must I quarantine upon arrival?

If I’m allowed in, should I go? Are Covid-19 infections on the rise? Will the holiday be what I want — or will shops, restaurants and beaches be closed?

Cutting through the chaos

A new website answers all but one of these questions (whether you should go is on you).

Launched in May, Covid Controls was developed by a team who met while working at the Singapore-MIT Alliance for Research & Technology (SMART), a research center created in 2007 by the Massachusetts Institute of Technology in partnership with the National Research Foundation of Singapore.

We created it because we saw there was no comprehensive Covid-19 dashboard specifically geared towards travelers.

“We were a team conducting research at the intersection of big data, design and travel,” said Mohit Shah, who along with three colleagues launched the website four months after leaving SMART.

“We created it because we saw there was no comprehensive Covid-19 dashboard specifically geared toward travelers,” he said, “especially at a time when the situation is changing so rapidly.”

What the site can tell you

Covid Controls tracks travel restrictions and Covid-19 data from around the world to provide “everything a foreign visitor needs to know” before traveling, said Shah.

Information is presented in color-coded maps, and countries can be clicked or searched by name to determine which places are allowing tourists (and which are banning them), whether airports are open, and whether documentation and medical testing are required to enter. 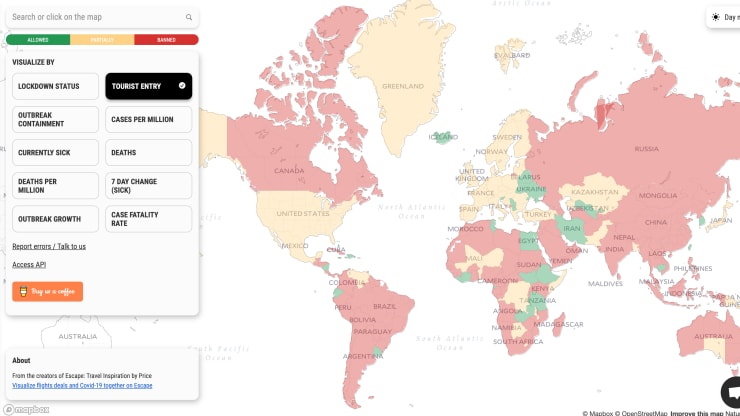 Lockdown details, if any, are also provided, allowing travelers to check whether curfews are in effect and if restaurants, bars, shops and tourist attractions are open — with or without restrictions.

The Covid-19 data is particularly helpful to understand the extent of a country’s current outbreak. Travelers can review new daily cases, the number of people presently sick, containment statistics and outbreak trends, the latter being Shah’s favorite part of the site.

“It shows where the curve is flattening, growing or declining,” he said.

Data can be found for each of the 50 states of the United States, Canada’s 13 provinces and territories, Russia’s eight federal districts, and Australia’s six states plus two major territories.

At the bottom of each destination page, a list of sources is available, followed by links to recent media coverage of the area. For example, you can see that while the Dominican Republic is open to tourists, the Miami Herald reported that hospitals there reached capacity with Covid-19 patients about two weeks ago, which may affect your decision to travel there.

The website added a new feature this week. Users can now indicate where they live (or have recently traveled) to see which countries they can visit.

“This way you’ll be able to visualize, for example as an American resident, exactly which countries you are allowed, allowed with restrictions, or completely prohibited,” said Shah.

The designation of some countries as “partially allowed” is based on how welcoming the government is to tourists. Factors for that determination include: the number of entry points, limits on tourist activities (such as closed regions or attractions) and quarantine and entrance requirements (such as medical tests, tracing apps, insurance or other documents).

What the site can’t tell you

Not every country is covered. Information for some small nations, such as Bermuda and Vatican City, aren’t included on the site (yet), though countries like Monaco and the Marshall Islands are.

Some U.S. states and the U.K. do not report recoveries. The team now uses a methodology to estimate that data; if a case is not marked as a death or hospitalization after six weeks, they assume it to be a recovered case. Those assumptions will be clearly marked as estimates, Shah said.

People can quickly point out if something has changed in their country.

Medical data comes from the World Health Organization, The Covid Tracking Project (a volunteer organization launched from The Atlantic) and the Centers for Disease Control and Prevention.

Users are also instrumental in fine tuning the website, Shah said. When a Singapore-based CNBC editor pointed out that Singapore households can accept up to five guests per household, not 10, Shah sent the newspaper article that his team relied on for that information.

“We will update this right away,” he said (which they did). “This is exactly why we have added a chat button on the website. People can quickly point out if something has changed in their country.”