At the Phoebe Waterman Haas Public Observatory, we love observing the two biggest planets in our solar system—Jupiter and Saturn! 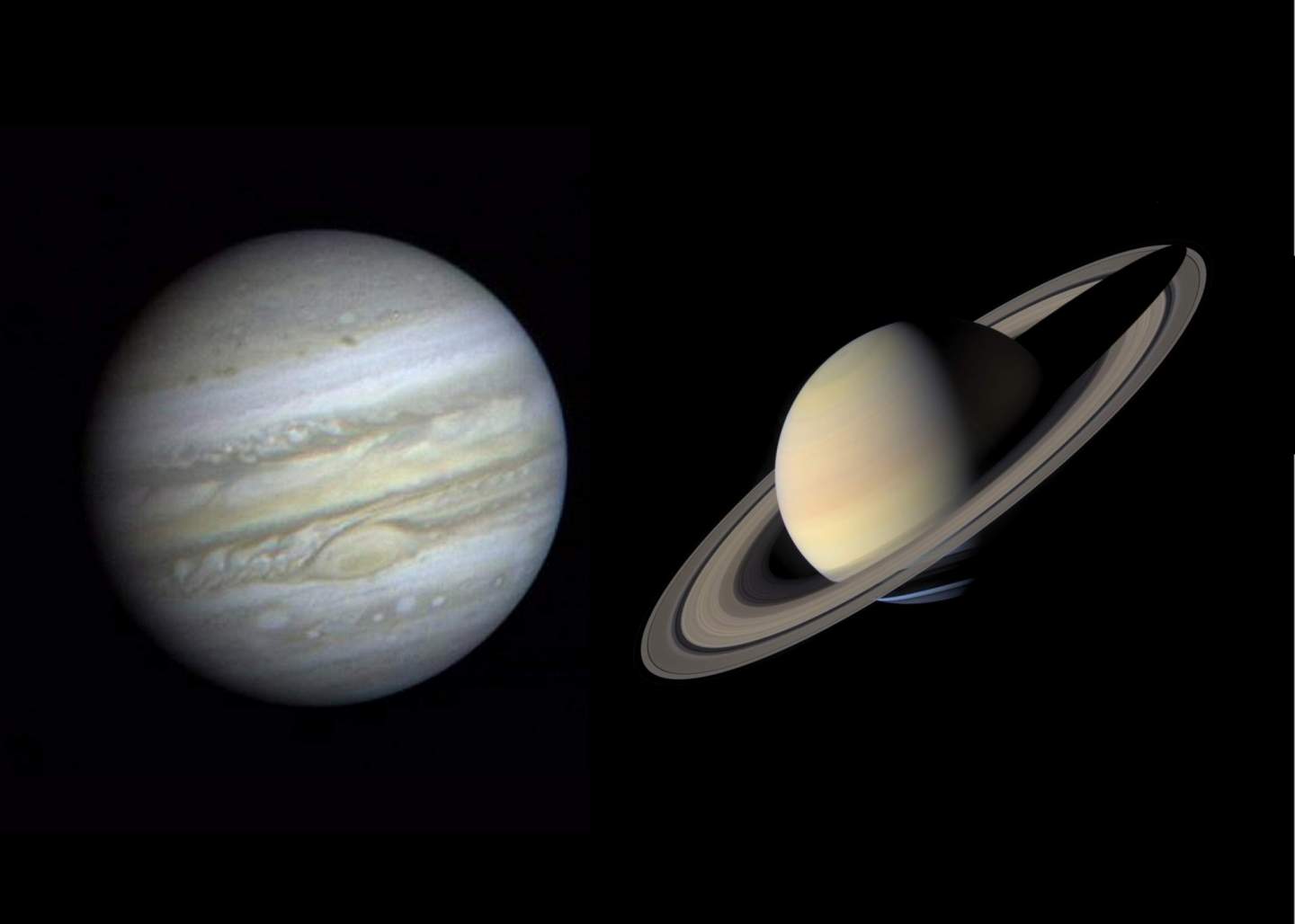 This month, these gas giants are coming together in the sky for a once-in-a-lifetime event called a great conjunction. It will peak on December 21, which is coincidentally, also the day of the solstice! If you’re looking for a fun activity to do this holiday season, you wouldn’t want to miss this remarkable astronomical event!

What is a conjunction?

Conjunctions happen because of our perspective from Earth, but the planets are actually very far apart in space. To us, it will look like the two planets are occupying the same exact space in the sky. Yet, they’re really not. Our solar system is incredibly big, with a lot of space separating the planets. There are millions of miles between Earth and the other planets, and they are millions of miles apart from each other, even at their closest points.

So, if the planets are not really next to each other, why do they appear so close together? As the planets travel in their orbits around the Sun, sometimes two of them end up forming a straight line with the Earth. When we look-out from Earth and observe the planets along that line, they will appear very close together in a conjunction.

How can I see it?

You can start observing right now! The planets appear just after sunset. Even though the day of closest conjunction will be Monday, December 21, the two planets will be getting closer and closer every day before, and will slowly move away from each other in the days after.

If you are located south of 50 degrees, north latitude, you will likely have a good view of this conjunction about 30 minutes after sunset. However, as these planets are getting low in the sky above the sunset, they won’t be up for very long.

Look just above where the Sun has set—if you go out to look during the week before this conjunction, you’ll get a good idea of where to find it on December 21! You may also want to look for the crescent Moon near the planets on December 16 and 17.

The Horus planets Jupiter & Saturn are conjunct in Tomb 353 of Senenmut. Did the Ancient Egyptians record the first documented #GreatConjunction between 1473 – 1458 BCE? Too right they did! pic.twitter.com/RnkdNMKEWn

What’s the connection with the National Air and Space Museum?

At the Museum, we research and interpret the history of aviation and space, including astronomy. Part of that work is learning more about how people in different parts of the world have experienced these events in the past. Events like conjunctions have played a role in how people have interpreted the skies, including deciding when to plant crops, holding religious ceremonies, or even predicting astrological information. Figuring out the patterns of celestial objects—such as determining the sequence of conjunctions by observing planets’ orbits over time—is something that people all over the world have done for centuries, regardless of purpose. One of our favorite tools for figuring out these patterns is an astrolabe, which helped users understand—and analyze—the sky.

We also study these planets at the Museum. Colleagues in our Center for Earth and Planetary Studies study the geology and environments of these planets, particularly their icy moons Enceladus and Europa! You may be able to catch one of those moons if you use a telescope or binoculars to view this conjunction—you can figure out the position of Jupiter’s moons using an app or website.

Join us for two live chats where we answer your questions about this astronomical event, which hasn’t occurred for hundreds of years: