The UN Human Rights Office is under fire for sharing the names of Chinese government opponents, including Uighur activists, Tibetans, and Hongkongers, who took part in UN activities, for a long period.

Emma Reilly, a staffer at the Office of the United Nations High Commissioner for Human Rights (OHCHR) and a human rights lawyer, has repeatedly alleged that the office shared the names of dissidents with the Chinese government. 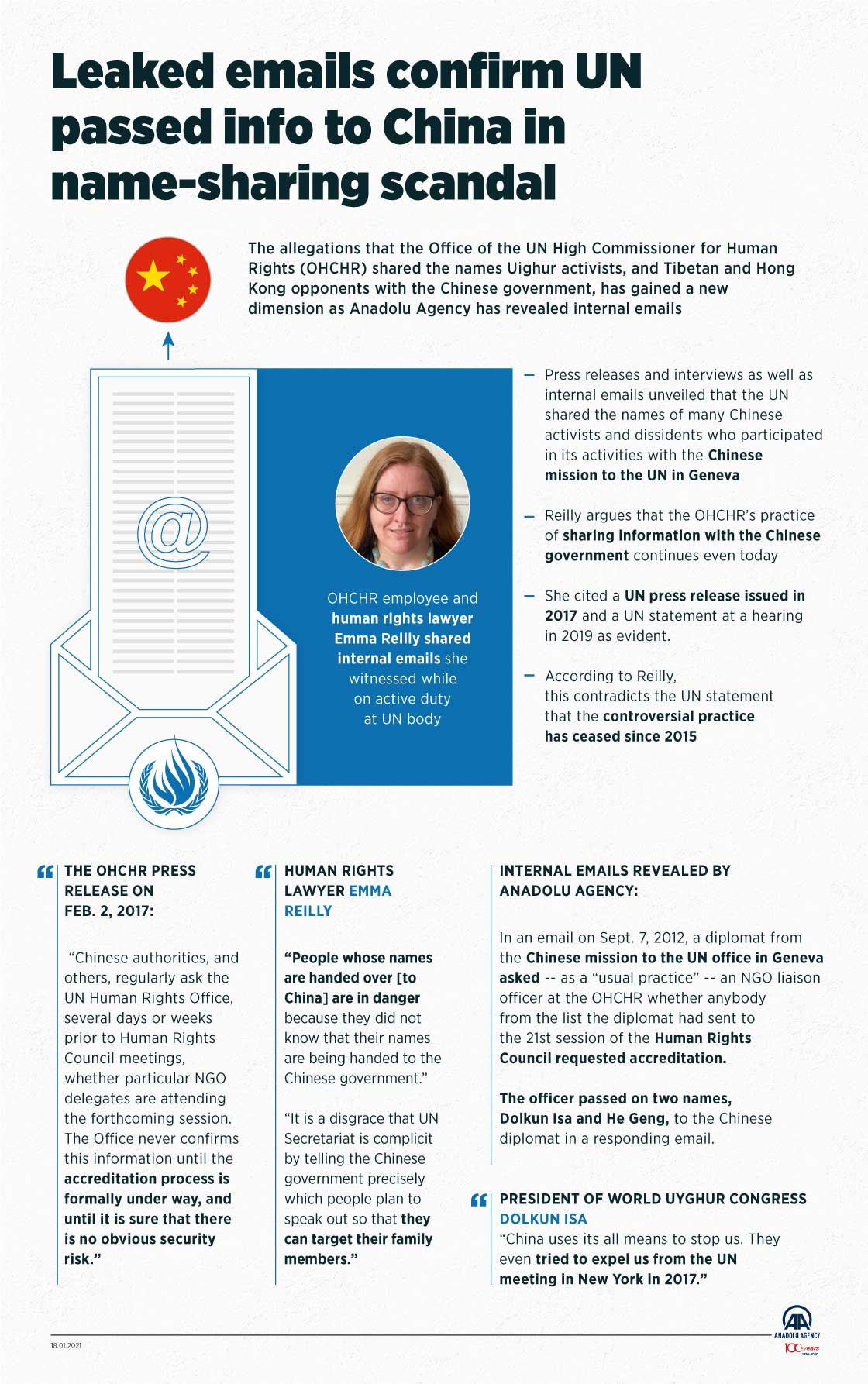 She recently shared the emails she received through the UN body’s internal emailing system while she was on active duty at the OHCHR with Anadolu Agency.

Although the OHCHR denies the allegations, some emails among its employees, press releases, and interviews have revealed that the UN shared the names of many Chinese activists and some opponents who attended panel discussions, conferences, and open sessions on human rights with the Chinese government.

The allegations have come to light after Reilly reported it to authorities.

Last week Reilly said on Twitter that she could be dismissed after accusing her employer of sharing the names of Chinese government opponents who took part in UN activities.

The OHCHR has denied the allegations, though, saying the controversial practice has ceased since 2015.

But an OHCHR press release issued in 2017 confirms that the Chinese authorities “regularly” asked the UN office to confirm whether particular names were attending their meetings.

“Chinese authorities, and others, regularly ask the UN Human Rights Office, several days or weeks prior to Human Rights Council meetings, whether particular NGO delegates are attending the forthcoming session. The Office never confirms this information until the accreditation process is formally underway, and until it is sure that there is no obvious security risk,” read the press release.

China has been “darkest” for human rights since 1989: HRW

Human rights organizations, including UN Watch and Human Rights Watch, argue that the UN’s practice endangered not only the lives of Chinese activists and dissidents but also their families and relatives.

In an email on Sept. 7, 2012, a diplomat from the Chinese Mission to the UN office in Geneva asked — as a “usual practice” — an NGO liaison officer at the OHCHR whether anybody from the list the diplomat had sent to the 21st session of the HRC requested accreditation.

The officer passed on two names, Dolkun Isa and He Geng, to the Chinese diplomat in a responding email.

In another email in 2013, the Chinese diplomat again wanted to confirm which of the names on the list would attend the session, thanking the office for cooperation.

In separate emails, it is evident that the Chinese mission even sent invitations to the OHCHR personnel for lunches.

“I don’t actually have a job. The UN continues to pay me a salary that I have no terms of reference. They cannot fire me because they know I’m telling the truth. But they don’t want me doing any work,” she told Anadolu Agency about what she experienced after reporting the UN’s practice.

After she first found out in February 2013 that the OHCHR was leaking the names of Chinese dissidents and activists, Reilly said she immediately started reporting it.

She claimed that an OHCHR employee made false statements to the EU, and the EU did not follow up on the matter.

Reilly said she also reported the situation to Ireland, the UK, the US, and Germany.

“A lot of those member states reported to me that the UN had lied to them. Again, I give them the emails in which names were handed over.”

She said that the names of 50-70 people who are opponents of the Chinese government were handed over and among them are 8-9 people with US citizenship and 5-6 with German citizenship. Reilly also said that she informed both countries about the situation.

“So, it’s also a very big diplomatic consular issue that the UN is handing over the names of citizens of other countries to the Chinese government,” she added.

Denying the statement by the UN body that it has ceased “the limited practice” since 2015, Reilly asked: “And later in 2017, the OHCHR made up this story that it had stopped in 2015. Why did they put out a press release admitting it in 2017? Why did they admit it in court in 2019?”

Speaking of the legal process, Reilly said that she won the first case. “And in that case, the judge ruled that the Secretary-General had decided not to apply the UN policy in my case and that was not legal.

“The UN did not like that judgment very much. So they got rid of the judge,” she further claimed.

“Because of the structure of the UN, I can only take the UN to an internal employment tribunal. I cannot sue the UN for endangering people,” she added.

People’s lives are in danger

Reilly argued that the OHCHR does not have the right to share information about the participants in their meetings.

“There is actually a rule at the Human Rights Council. The rule is that if a country wants to know who is coming, they have to ask the plenary. They have to ask in front of the member states,” she stressed.

“And that rule is written, it’s very clear. And it was broken for China.”

Adding that the people whose names were handed over are in danger, she underlined that it was her responsibility as a UN Human Rights Officer to speak up.

Isa, a prominent Uighur politician, and activist who attended the UN Human Rights Council meetings in Geneva in 2016 and 2019, was also among the people whose names were handed over to the Chinese diplomats, she said, adding that the activist testified in her favor.

“Chinese agents visited his family home to tell him to stop his advocacy. He’s been arrested several times. He was refused entry into the UN itself as a direct result of his name being given to the Chinese government. His brother was arrested,” she said.

Asked more about the people whose information was handed to China, Reilly said most of them were Uighurs, but Tibetans, Hongkongers, and human rights lawyers are among them.

“It’s anyone that China wishes to have information about,” she said.

Reilly said that the UN practice was “complicit in international crimes”.

She said: “The UN Human Rights Office should not be actively endangering human rights defenders. And that shouldn’t be controversial. And it has been shocking that the only concern of the Human Rights Office has been to stop me reporting it, but not to stop the practice.”

Meanwhile, the UN has denied the allegations, as OHCHR Spokesperson Rupert Colville told Anadolu Agency on Jan. 14 that “since 2015, even this limited practice ceased.”

“For the past five years, OHCHR has not confirmed the names of individual activists accredited to attend UN Human Rights Council sessions to any State. Ms. Reilly’s repeated claims the practice continues to this day are false,” he stressed.

Isa, the president of the World Uyghur Congress, told Anadolu Agency that they wanted to attend the UN Human Rights Council meeting in 2013 with Uighur activist Rabia Kadir and other Uighurs but the police attempted to get them out of the council room, which he says was the result of pressure from Chinese authorities.

Even in 2018, Isa said, a Chinese diplomat called him a “terrorist”, trying to stop him from entering the UN, but the issue was later solved by Germany’s initiative.

The Uighur activist also noted that in 2017 he was detained before a meeting in Italy due to pressure from China.

Isa said he had lost contact with his entire family since 2017, adding that his mother died in a “concentration camp” in China in 2018, and his older brother was arrested while his younger brother has been missing since 2016.

He later learned from the Chinese daily Global Times that his father had also died although he has no idea when or where he died.