In some ways, people who are neurodivergent have been seen as different or other in society but not always in a positive way or considered that thinking differently from the norm is key to developing new ideas and creates paradigm thinking in science, technology, and the arts. New ideas often come from seeing the world from a different perspective. 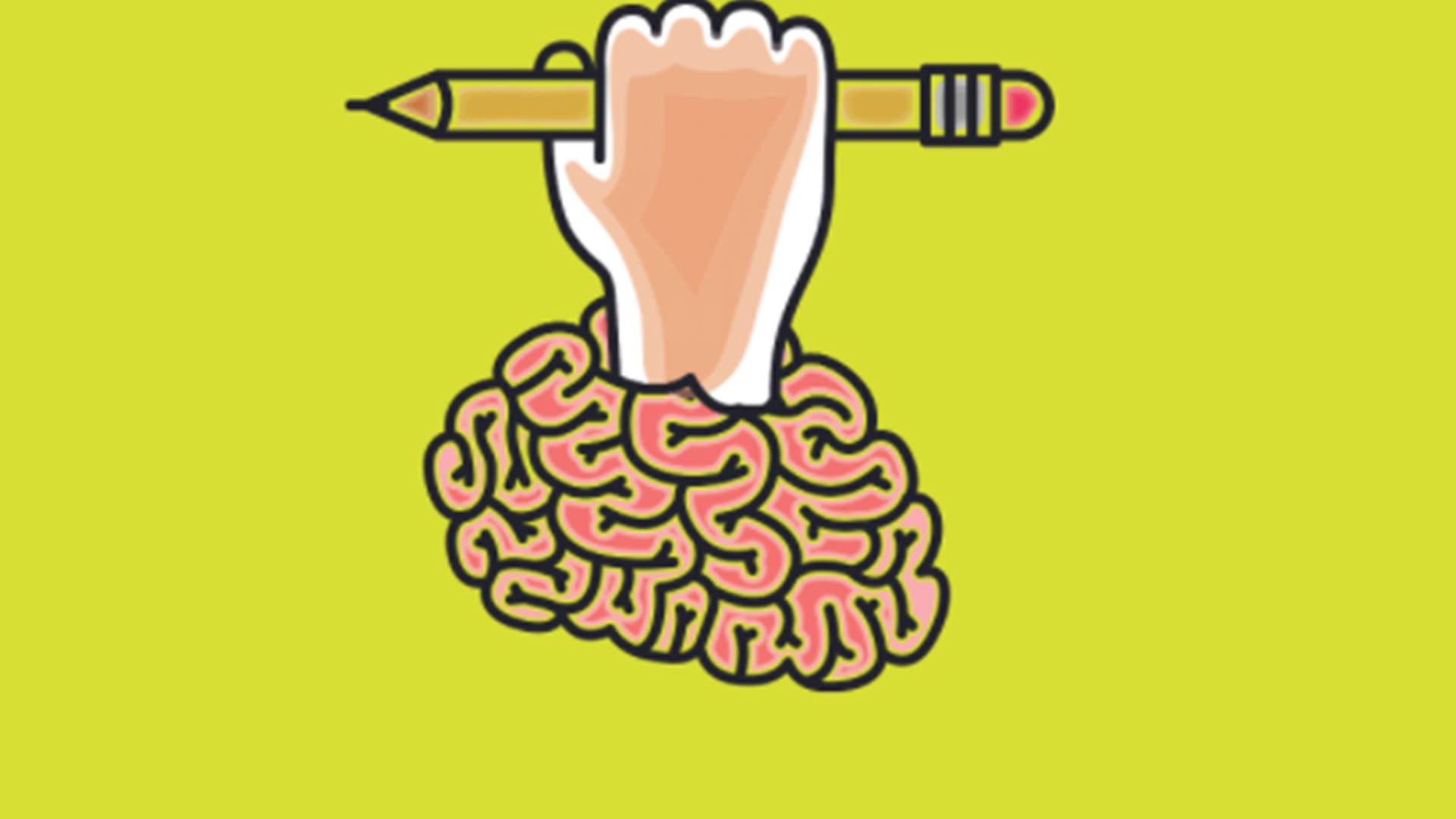 ‘Here’s to the crazy ones, the misfits, the rebels, the troublemakers, the round pegs in the square holes… the ones who see things differently; they’re not fond of rules… they push the human race forward, and while some may see them as the crazy ones, we see genius, because the ones who are crazy enough to think that they can change the world, are the ones who do.’ (Steve Jobs et al., 1997).

Maybe Steve Jobs’ quote today is not the one I would want to see as it portrays negative stereotypes rather than celebrating the achievements of people who take chances ( at times) and are passionate about creating a different and better world. In a neurotypical world, people have been defined as diverging from the norm, by disorder and deficit and not by talent, strengths, and novel thinking. This has led to many reduced opportunities and a widening employment gap ( more on this another day!)

Neurodiversity is all about cognitive diversity in the way we think, see and perceive the world, communicate and act. Around 1 in 6 of the population are neurodivergent. If we think of a normal distribution and take slices in different directions for communicating, writing, designing, and look at those who 1 and 2 standard deviations from the mean you will find people who by definition are neurodivergent. But people don’t come neatly packaged.

I always find it odd that we seem far keener supporting people rather than labels. 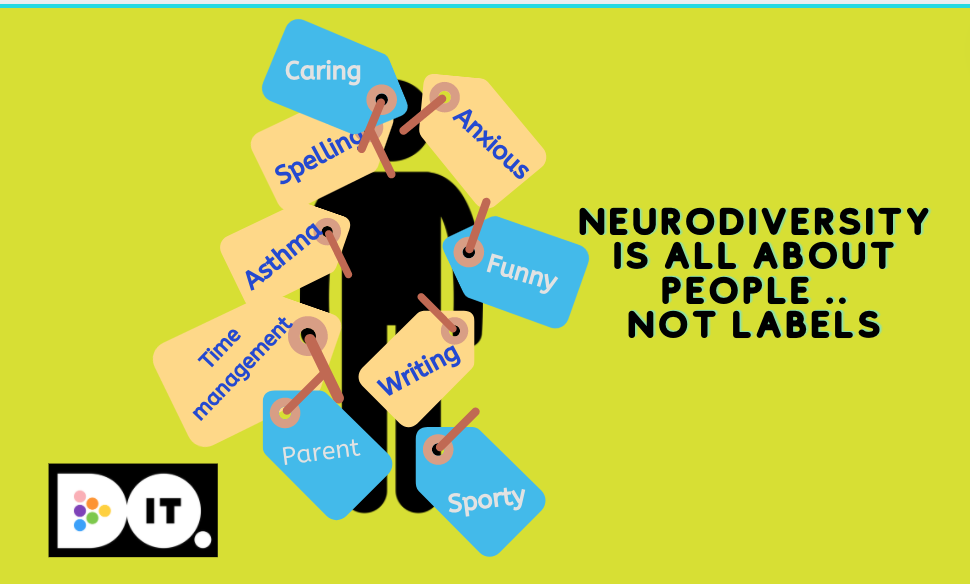 We talk about people who are dyslexic or someone with autism(or autistic) or has ADHD or Dyspraxia for example. Labels are names for ‘conditions’ that have a cluster of traits and characteristics associated with them. But people don’t come in neat boxes. These traits vary from person to person and each of the ‘conditions’ often overlap. Not surprisingly our brains don’t separate these conditions – we have done. So, someone with spelling difficulties may also have difficulties with motor skills such as handwriting, and challenges focusing or with time management. At the same time, they may be excellent dancers or could be a scientist. 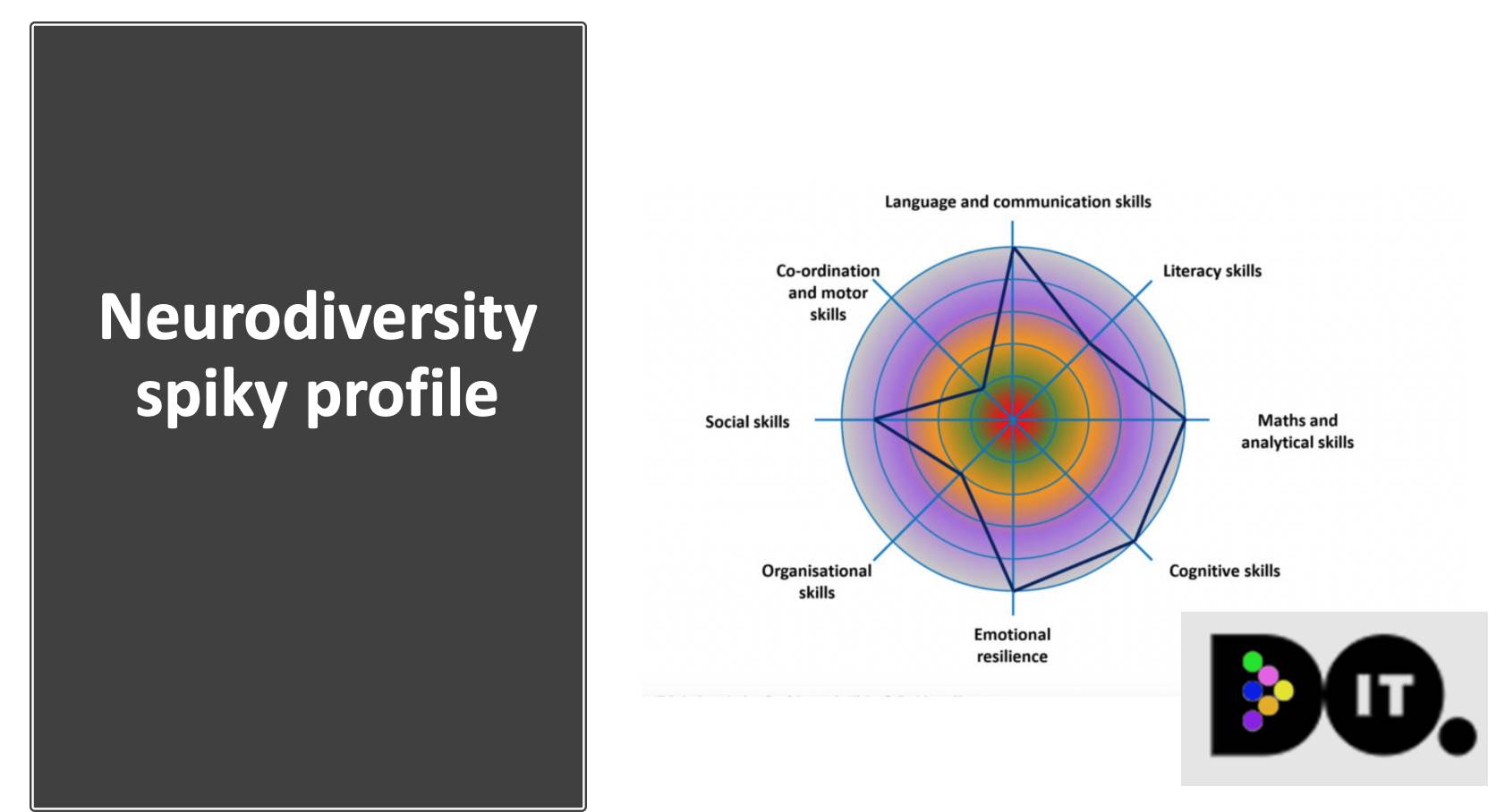 When we can maximize the strengths and minimize challenges, we optimize the talents.

At the start of 2020, the UK had 5.94 million small businesses, equating to 99.9% of the total business population. New business start-ups are the innovative lifeblood of our society. Ten years ago, when there was the last global economic crisis we learned from one study (2010) from two countries that creative entrepreneurs can weather the current global economic crisis better than traditional businesses. We have seen this during these difficult times with those who have been agile and switched their business online. We have seen new businesses start such as making masks and selling them in the first few weeks of the pandemic.

The new business will need to happen post-Covid-19 and we need entrepreneurs with novel ideas and new solutions. We need risk-takers too. Entrepreneurs contribute £196 billion pounds to the economy. This includes many women-led businesses that contribute £3.51bn to the UK economy (2015) according to a study by the Royal Bank of Scotland. Successful entrepreneurs need to be passionate, obsessive, optimistic, and hard-working. The ripple factor of the start-ups is that they then employ 3.24 million people nationwide.

Who are the entrepreneurs?

A survey of Britain’s 69,000 self-made millionaires has unraveled the mindset of the successful entrepreneurs and found most like to take risks, half come from unprivileged backgrounds and, tellingly, 73% don’t notice or care what others think of them.

Characteristics of an entrepreneur

4.    Self-Confidence– sometimes lacking because of poor past experiences in school.

8.    Grit – some people will have become resilient and are determined to be successful despite challenges- this is a neurodivergent trait if this hasn’t been ‘knocked out’ by the pathway to employment.

There is an extensive list of self-made millionaires who are neurodivergent including Ben Way, who at the age of 17 years was the head of a £60,000 computer business. A survey nearly twenty years ago (2003) commissioned by BBC2 for Mind of a Millionaire, found evidence that 40% of entrepreneurs are likely to be dyslexic, four times the national average. 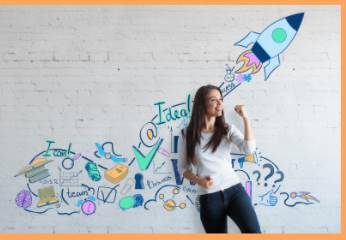 Thurik et al,(2016) in their paper also discussed ADHD symptoms and entrepreneurial orientation (EO)in small firm owners. The study looks at a sample of French small firm owners and contributes to the understanding of entrepreneurship, particularly the determinants of EO, and the need for “destigmatizing” ADHD, which is often considered solely as a clinical disorder requiring treatment rather than a potential set of characteristics that could offer new thinking, new ideas, and new solutions. Why would we not want to be the ones to capitalize on this? Globalization involves the movement of ideas and innovations, with network creation as an important by-product (Larsen & Mudambi, 2013) and is also an enabler of important entrepreneurship outcomes. The world is a very small place and our ability to network at a global level will mean we can grow exponentially if we harness this often wasted source of talent.

Creating the environment for entrepreneurship AND neurodiversity

Business incubators, clusters of innovative SMEs, science and technology hubs, and development agencies can play an important role in facilitating appropriate access to financing for SMEs at the local and regional levels. But there has not been an understanding of how to support someone with neurodivergent talent. Recognizing the challenges and also understanding different and personal ways of communication is essential.

This requires active inclusion processes. Vorley et al in their paper ‘Supporting Diversity and Inclusion’ in innovation from Innovate UK make important points that: “Participation in business innovation is influenced not only by minority status but also by intersections with other social categories, such as gender, age, and class/socioeconomic status.” If we are looking out for the people who tell us they are neurodivergent and not put inclusive processes in place we will provide opportunities for a small privileged selection of people who have the confidence to disclose and had the opportunity for some support along the way. 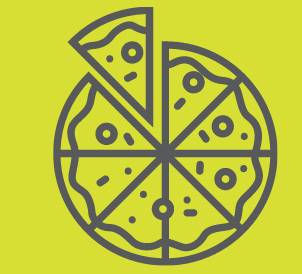 Seeing neurodiversity as one part of the pizza slice of a person is fine as long as we consider the other slices of that person. Neurodiversity is only one part of who we are. Vorley et al go onto say: “Commonalities between different minority / under-represented groups are often more striking than the differences, but some significant differences nevertheless emerged, in terms of perceptions, attitudes, motivations, barriers and support needs.”

I was talking to someone the other day and she really needs a few hours a week from a virtual PA. She had some amazing ideas and was clearly talented. The line between success and failure is a fine one. Her success relies on someone to make bookings for her, invoicing, and administration tasks which she finds very difficult to do. Successful people in large organizations often have this support but small amounts of support ( that can lead to success) SMEs are often the missing factor. The reality is the cost, especially in the early days of a new business. They are not Jack( or Jill) of all trades, but they are certainly master/mistress/person of some!

Innovate UK’s report also mentions the way we can sometimes view what innovation is through a narrow lens. “The traditional concept of innovation tends to privilege technological over social innovation; cutting-edge, innovative products over innovations in service delivery; and economic value over social value. However, these taken-for-granted assumptions can be problematized and the concept of innovation reconceptualized to include innovation with and by diverse actors and for the benefit of all (Welter et al., 2017).”

Setting up networks and gaining research

We may want to grow entrepreneurs in the UK, and we will need to grow intrapreneurship in school, college and workplaces so some can become entrepreneurs. An intrapreneur works inside an organization and can develop an innovative idea or project that will enhance the company or organization’s future. The intrapreneur is generally given autonomy to work on a project that may have a considerable impact on the company. Over time, an intrapreneur may turn into an entrepreneur. We have seen successful spin-outs from universities but perhaps recognizing and encouraging neurodivergent talent has been less focused on.

The pathway into the support and opportunities needs to be inclusive and accessible. I was recently trying to put a bid in for a piece of work. I found the online system was complex and unclear. Working in collaborative networks could benefit many.

Good buddy and mentoring schemes and also support from development programs can really help. We need to ensure those who run them ensure accessibility in working practices and are representative of those they represent.

As an academic, as well as a small business owner, I recognize two things. Firstly, we need research to understand what are the specific challenges and barriers for a range of neurodivergent entrepreneurs and secondly, we need to understand the types of support and timing for them that make a difference. Dr. Nancy Doyle and Professor Almuth McDowall at Birkbeck are starting to drive some of this important research in this area but there remain huge gaps in our understanding.

I have been speaking to Rob Edwards who is aiming to set up the Neurodiversity and Entrepreneurship Association. He wants this to be focused on research, practice, and policy. His aims are to gather the conversations about neurodiversity and entrepreneurship together, to connect academics, existing and prospective SME owners, and policymakers.  He makes an important point that:

“Without an interconnected research base, shared knowledge and the pulling together of what information is available, it is a challenge to tackle the barriers that we do know about, like access to finance, education and training, implications for welfare benefits support, a lack of role models and mentors, and a robust and supportive business infrastructure.”

Organizations such as the Federation of Small Businesses also have a part to play in considering the role of neurodivergent small business owners and what support needs to be given. But we need to ensure this is not a cookie-cutter approach and neurodiversity and inclusion are thought about in any support being provided. Access to Work in the UK is also a key route and the support can make a real impact for many.

Why would we waste the talents from some of the 20% of your population who could deliver novel solutions that could fundamentally change the world ( or at least our local towns and cities for a start)? Of course, not everyone wants to be an entrepreneur but for some who do, their successes will also spawn jobs for many others.