The number of workers on UK company payrolls fell by 649,000 between March and June, official figures indicate. The number of people claiming work-related benefits last month – including the unemployed – was 2.6 million.

The overall jobless rate was unchanged but there are 47,000 more young people unemployed than there were a year ago.

Unemployment has not surged, as many feared, because large numbers of firms have put employees on the government-backed furlough scheme.

But economists say the full effect on employment will not be felt until the scheme ends in October.

How can we get a clearer picture of what’s going on?

The headline unemployment rate hasn’t budged since the lockdown was introduced to stop the spread of coronavirus. It stayed at 3.9% between March and May, unchanged on the previous three months.

But because of the effect of the furlough scheme on the employment market, analysts say the number of hours worked per week is currently a truer reflection of the impact of the coronavirus crisis.

The Office for National Statistics (ONS) said that since the start of the pandemic, total weekly hours worked in the UK had fallen by a record 175.3 million, or 16.7%, to 877.1 million hours. 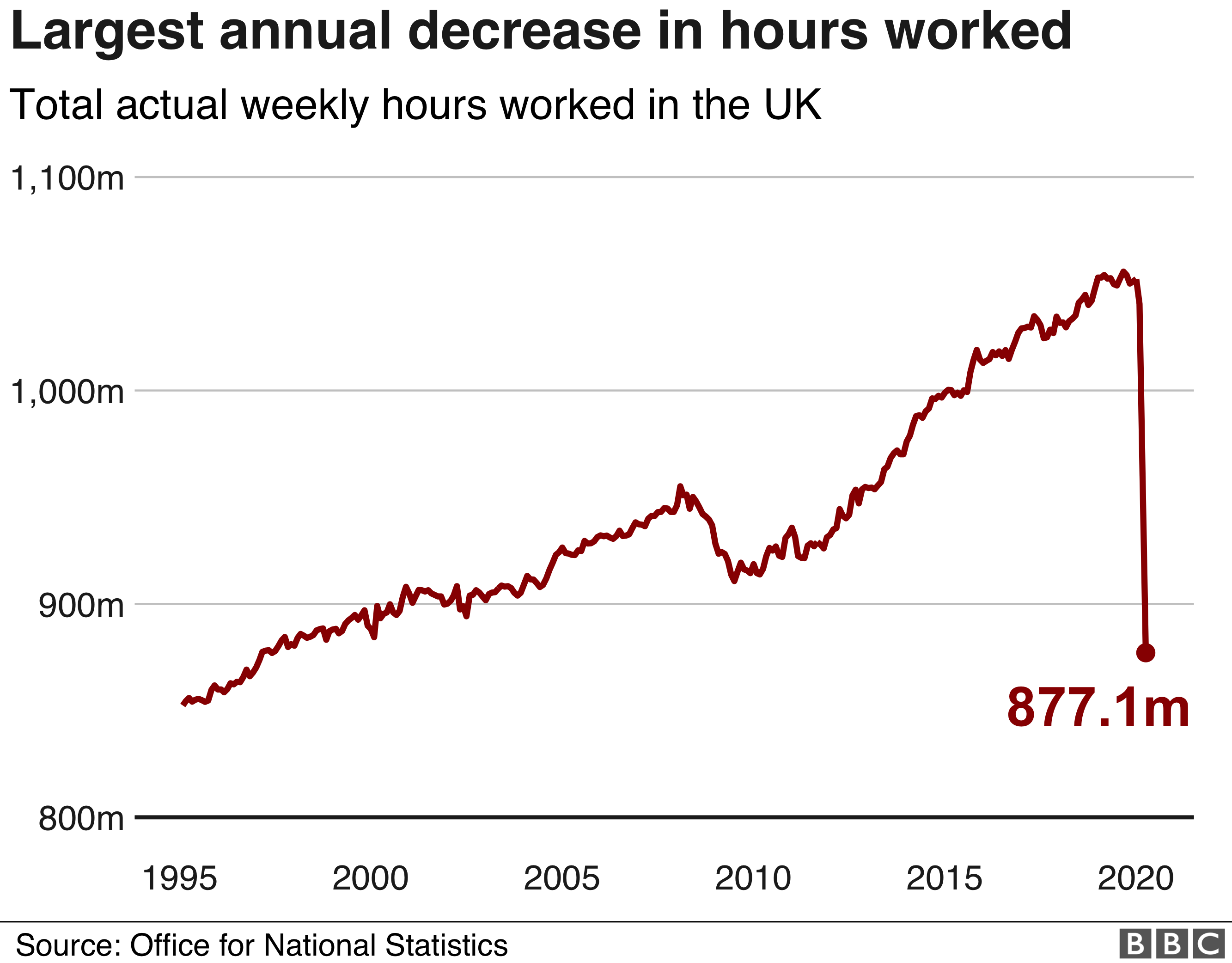 “This was the largest annual decrease since estimates began in 1971, with total hours dropping to its lowest level since May to July 1997,” the ONS added.

The number of Britons on payrolls – which means people employed by a company and does not include the self-employed – fell by 2.2% in June compared with March.

How are young people faring?

“Despite the lack of overall increase in the number of unemployed, the estimated number of people unemployed aged 16 to 24 years increased by 47,000 on the year, while other age groups remained steady,” the ONS said.

Many young people are employed in the hospitality industry, which was largely shut down from 23 March. The retail sector, also a source of jobs for younger people, has also been hard hit by the lockdown.

The number of young new claimants who have signed on between March and June is 276,000 – more than doubling over three months.

BBC analysis has found there are now constituencies with nearly 20% of their young population on Universal Credit or Jobseeker’s Allowance – including Walton in Liverpool and south Blackpool.

Even affluent areas such as south-west Surrey, Henley and Windsor have seen a quadrupling in the number of young claimants under lockdown, though many of these are likely to have become eligible to claim as a result of being furloughed.

According to the Resolution Foundation, one-third of 18 to 24-year-old employees have lost jobs or been furloughed during the pandemic, compared to one in six adults above that age.

Another think tank, the Institute for Fiscal Studies (IFS), says younger people are more likely to be employed in jobs that cannot be worked from home – particularly the hard-hit hospitality sector.

Are there any jobs out there at all right now?

There are not many jobs around for anyone.

The ONS added that a larger than usual number of those losing their jobs were not currently searching for another one and were therefore economically inactive rather than unemployed, while some longer-term unemployed people had stopped looking for work.

The figures came as a survey by the British Chambers of Commerce (BCC) said 29% of businesses expected to decrease the size of their workforce in the next three months. The BCC called for a cut in employers’ National Insurance contributions to protect businesses and jobs.

The government’s spending watchdog, the Office for Budget Responsibility, has warned that in the worst-case scenario, unemployment could rise to four million.

Theatre technician Charlotte Baker, 29, is out of work as a result of the coronavirus crisis.

She started a new job at the Fairfield Halls in Croydon in September last year and was furloughed in March.

Last month, she was made redundant, even though she could have been kept on furlough.

“Your mood plummets, your mental health and it’s just been very difficult living in limbo essentially,” she told the BBC.

“I obviously just started this new job which I absolutely loved and me and my partner wanted to buy in Croydon – we were looking at buying our first property together and that’s been put on hold.

“It’s difficult as well – as some people are getting back to normal, we get certain freedoms back, there are people like me and a lot of people I know that are very much in the depths of this and don’t know what’s going to happen.

“I’m thinking of doing a carpentry course. I could then potentially live off that, or hopefully if my job comes back, I bring those skills back into this job. But it is difficult, very hard.”

What are economists saying?

Jeremy Thomson-Cook, chief economist at financial services firm Equals, said: “The furlough scheme has made the monthly reading of job numbers rather meaningless, given nine million people are technically neither employed nor jobless.

“The only guarantee is that some will be looking for new work as the scheme winds down, and some will not be able to given changes in their living circumstances driven by the pandemic.

“Wage growth has fallen, which could either be caused by lower-paid workers rejoining the workforce, or from employers failing to top up furloughed wages when they previously had. As with all jobs data at the moment, we have to look through the prism of the furlough system to see what’s what.”

There’s a storm coming: the government’s official number-crunchers – the Office for Budget Responsibility – have warned that unemployment could hit four million this year.

But the bulk of that is yet to hit the numbers. The normal counts of employment have been propped up by support schemes: more than 11 million private sector workers are still on the government payroll. Those plans have been very effective in staving off a greater crisis as lockdown hit.

The looming turmoil and hardship is clear however, with average real pay – that’s after inflation – 1.3% lower than a year ago in May and the number of job vacancies at a record low.

The number of people counting as self-employed has fallen a record 178,000.

As employers now look towards the winding down of support schemes, the announcements of layoffs are now multiplying. Despite the chancellor’s new plan, a big rise in joblessness still seems inevitable.

The challenge is to getting people back into work – particularly younger ones, the group most likely to have been furloughed. Lengthy unemployment, especially at the start of a career, can blight livelihoods and prospects for decades.

And while the economy is opening up, the uncertain outlook may make employers reluctant to do the same with hiring.

Business Secretary Alok Sharma said he had “enormous sympathy” for people who found themselves out of work.

“I know it’s going to be very, very difficult for lots of people as a result of this. The best thing we can do is continue to open up the economy in a phased manner and a cautious manner and get businesses up and running again,” he told the BBC’s Today programme.

He said the cost of inaction would have been “far greater” than the action the government had taken.

Bridget Phillipson, shadow chief secretary to the Treasury, said every lost job was “a personal tragedy now and a hammer blow to public finances in the long run”.

She accused the chancellor of taking a “blanket approach” rather than targeting the sectors worst affected by the crisis.