China’s yuan has rallied to its strongest levels in more than a year, as the country’s economy continues to recover and investors grow less concerned about fresh U.S. tariffs.

On Monday, the currency traded at around 6.85 to the dollar in both the tightly controlled onshore market and freer offshore markets in Hong Kong and elsewhere, building on gains registered in the previous trading session.

“The clear outperformance by the Chinese economy versus the developed economies is favoring the yuan,” said Mansoor Mohi-uddin, chief economist at the Bank of Singapore. 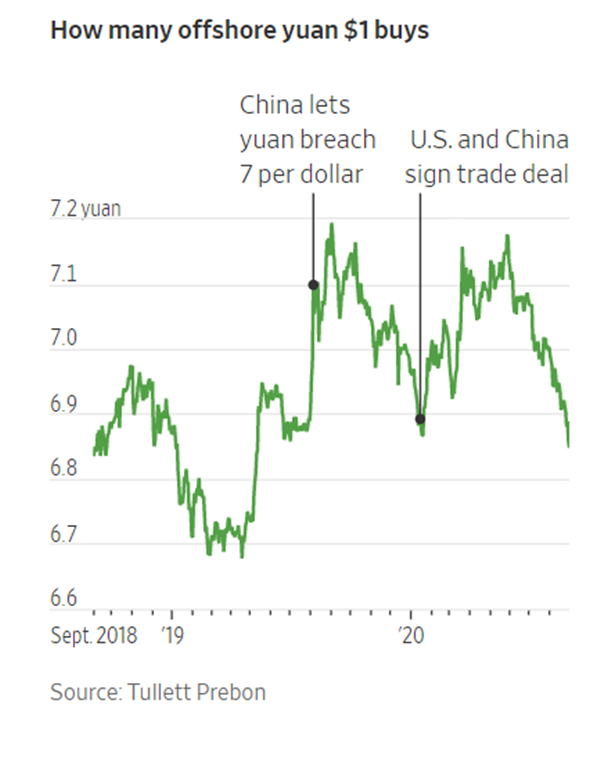 Prospects of a calmer relationship between the U.S. and China were also boosting the yuan, Mr. Mohi-uddin said. “The markets seem to be favoring a potential change in leadership in the U.S., and they are looking through the current tensions.”

“In August, the market has gotten a lot more comfortable with the idea that neither the U.S. nor the Chinese side has the inclinations nor the appetite to walk back on the trade deal,” said Sameer Goel, chief Asia macro strategist at Deutsche Bank.

Mr. Goel said the yuan was now in the middle of its two-year trading range against a basket of currencies. He said that meant Chinese policymakers were likely more comfortable letting the currency join a broader rally against the dollar, especially with less risk of the trade collapsing.

On Friday, the offshore yuan closed below 6.86 to the dollar for the first time since May 2019, according to Tullett Prebon data. As of Monday afternoon in Hong Kong, the onshore yuan had strengthened slightly further to about 6.849 per dollar, while the offshore yuan was at 6.848.

A widening gap between interest rates in the U.S. and higher rates available in China is also boosting the yuan, as investors seek higher-yielding assets. Foreign purchases of Chinese bonds hit a record in the second quarter.