A new report reveals a spike in the murder of global land defenders, especially in Latin America. The failure to combat climate change is forcing the most vulnerable to the frontlines, and to pay with their lives.

Environmental activists are being murdered in ever-increasing numbers. According to a new report by London-based NGO, Global Witness, 212 land and environmental defenders were killed in 2019 alone, a 30% rise from the 164 killed in 2018. Around 40% were indigenous people and traditional land owners.

More than two-thirds of killings took place in Latin America, with Colombia topping the list with 64 murders due to the failure to implement the 2016 peace agreement with FARC and protect farmers transitioning from coca to cocoa and coffee to reduce cocaine production.

The overall rise in murders is part of a broader trend. Astudy published in Nature in 2019 showed that in the 15 years between 2002 and 2017, more than 1,558 environment defenders were killed, doubling from two to four per week over that time. 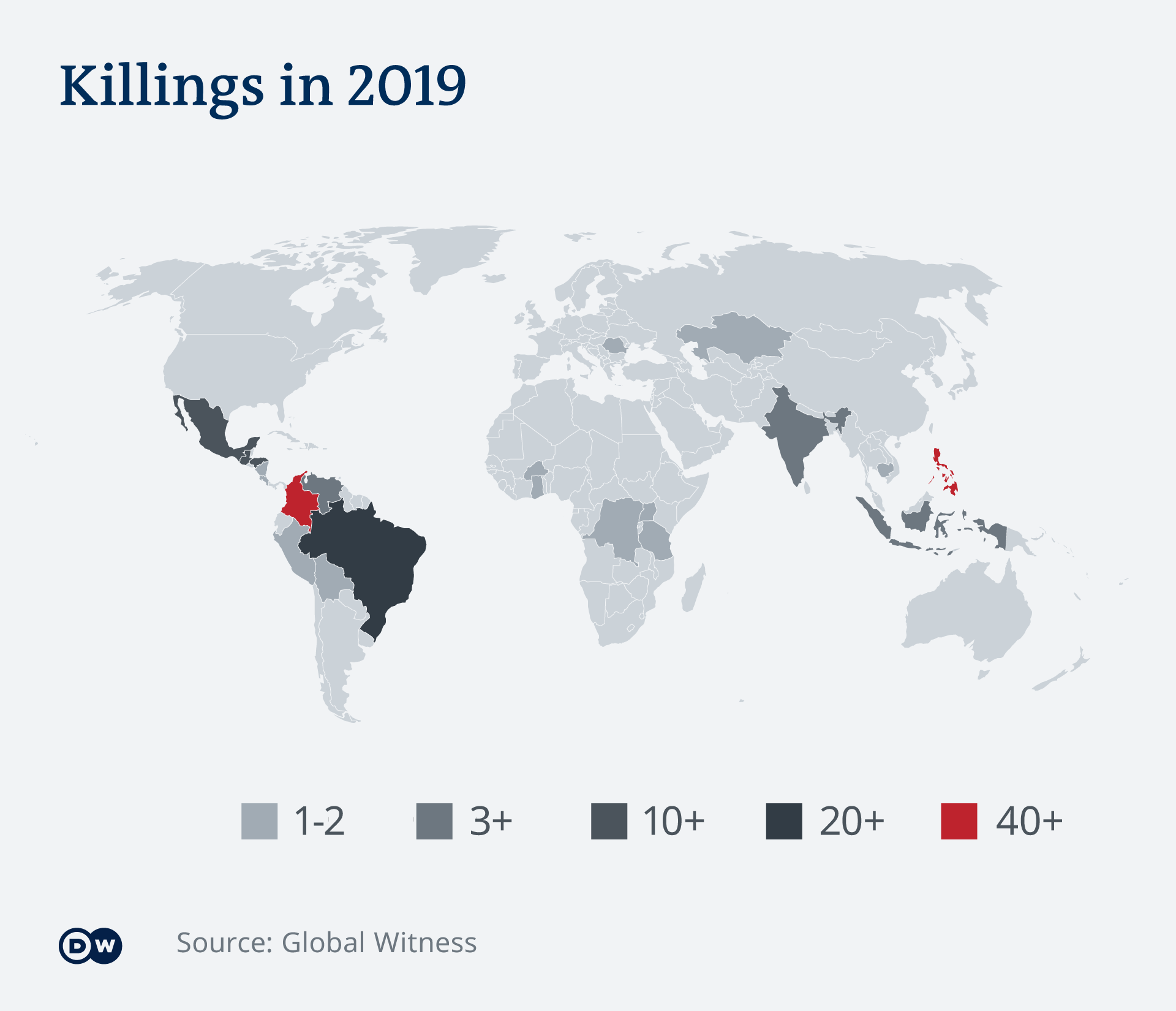 Mary Menton, a research fellow in environmental justice at University of Sussex who co-authored the report, told DW that she “would not be surprised” if the real figure were double due to the failure to report and even investigate killings. Meanwhile, Menton says only 10% of perpetrators are prosecuted.

Increasing conflict over scarce land resources in a time of rising global consumer demand is forcing indigenous and traditional community leaders to protect their territories, says Rachel Cox,  a campaigner at Global Witness.

“Indigenous people are disproportionately vulnerable to attack,” she says of minorities resisting mining, logging and the agribusiness projects encroaching on the frontiers they call home.

But the killings are only the tip of the iceberg. “Many more defenders were attacked, jailed or faced smear campaigns because of their work,” said Cox.

The deadliest country for environmental activists in 2018, at least 46 environmental defenders were murdered last year in the Philippines, a 53% increase and a return to the high murder rate during the first years of the Duterte regime. Twenty six murders were related to agribusiness, the highest in the world.

Leon Dulce, the national coordinator of Kalikasan People’s Network for the Environment, says “we are bracing for more spates of violence” due to government efforts to expand mining and logging “under the guise of a COVID-19 economic recovery.” President Duterte is also using draconian anti-terror laws to suppress activists by labeling them as criminals.

The southern island of Mindanao remains a hotspot with 19 environment-related killings in 2019 due to ongoing opposition to palm oil and agribusiness fruit plantations.

Attacks are especially prevalent on the territory of these indigenous or Lumad people, Dulce explained, because it forms “the last forest corridors of the island.” Indigenous communities “continue to stand in the way of mining, dam, and agribusiness tenements,” he said.

The Philippines’ high vulnerability to climate change, especially typhoons, has further necessitated this resistance, according to the report.

Brazilian President Jair Bolsonaro’s aggressive push to expand large-scale mining and agribusiness in the Amazon has forced indigenous peoples further into the frontlines of the climate crisis, especially as deforestation on indigenous land increased by 74% from 2018 to 2019. Of the 24 murders of land defenders in Brazil, 90% occurred in the Amazon.

The uptick in violence in the resource rich region that is also the planet’s largest carbon sink, comes as the Bolsonaro government introduced a controversial bill in 2019 that calls for the legalization of commercial mining on indigenous land.

In June last year, it was reported that dozens of miners dressed in military uniform invaded the Wajapi community in the Brazilian Amazon, stabbing and killing one of its leaders.

Eighteen land and environmental defenders were killed in 2019 in Mexico, a rise of four. They included Otilia Martínez Cruz, 60, and her 20-year-old son, Gregorio Chaparro Cruz, who were found dead outside their home in the town of El Chapote in north-west Mexico on May 1, 2019. The indigenous Tarahumara defenders were allegedly killed by assassins in retaliation for their efforts to stop the illegal deforestation of their ancestral land in the Sierra Madre.

Two months earlier, Samir Flores Soberanes was shot dead outside his home on February 20, 2019. An Indigenous Nahuatl farmer and environmental activist from Amilcingo, Morelos, Samir publicly spoke out against the Morelos Integral Project (MIP) to develop coal and gas energy infrastructure the day before he was killed.

Romania has over half of Europe’s remaining old-growth and primeval forests that have been dubbed the “lungs of Europe.”

But according to Greenpeace, some 3 hectares (7.4 acres) of this pristine forest is degraded every hour in Romania, much of it by the “wood mafia” that the two forest rangers opposed. The Global Witness report notes that there were hundreds of threats and attacks against the rangers before they were killed.

Despite the thousands who marched in Bucharest and across Romania in late 2019 to oppose illegal logging and to demand an investigation into the attacks, no one has been charged.

Killings rose from four in 2018 to 14 last year in Honduras, making it the most dangerous country per capita for land and environmental defenders in 2019. Lethal attacks against activists were especially prevalent against women, continuing the upward trend since Honduran activist and indigenous leader Berta Caceres was brutally murdered in 2016, months after winning the prestigious Goldman Environmental Prize, for opposing dam construction in her region.

“Women have an important leadership in the fight against extractive companies and criminal groups that want to take away their land,” said Marusia Lopez of the Mesoamerican Initiative of Women Human Rights Defenders, which documented 1,233 attacks against these women defenders between 2017-18.

Afro-indigenous Garifuna people living on the east coast were especially targeted in 2019, with 16 killed for defending their lands, mostly from palm oil and tourism development. Criminal groups have long attacked Garifuna communities with impunity.